Recently I launched Jetty UI Kit — a collection of blocks for quickly making landing page designs in Figma. In this article, I'd like to outline what went into the product, how it sold, and reinforce a few of the lessons I learned along the way.

Creating and launching a product is tough. There are so many points where self-doubt, indecision, or uncertainty threaten to bring everything to a halt. I don't see people speak about the mental fortitude required to overcome that stuff very often, so I at least wanted to mention it. If you're thinking of launching something, ignore all that crap, do it anyway. You'll be surprised at what you can accomplish and how much you can learn.

When I first announced the product, I thought it was mostly done, and only and content creation stuff remained to finish. After all, I worked on it for quite some time before announcing it, and it seemed like the right time. So I set the date on Gumroad to a week out, thinking I was giving myself enough buffer time to get everything done. In hindsight, more time would've been great, but I'm glad I stuck to it. Once the launch date was set, I got a serious case of "imposter syndrome," so it turned out I had a ton of work left to do.

I'll put it bluntly — I underestimated the amount of time the non-product stuff would take. Building out the sales page, and the landing page (which was put up just this week!), finalizing videos, and putting the finishing touches on everything took much longer than expected. Putting something out to the world that I can be proud of ended up taking a bit of extra work, but it was all worth it. Regardless of how it sells, it took me well over 100 hours to make, and I know it's something I'm proud of.

I'm happy with how it's selling, but this product alone isn't going to give me financial freedom. That's okay. I built something I wanted, and other people find it useful too. That right there is a dream come true! It makes me feel warm and fuzzy, and that's better than any amount of money. Thank you to all of you who purchased (or showed interest in) the kit. Your support has been incredible and means an awful lot! ❤️ 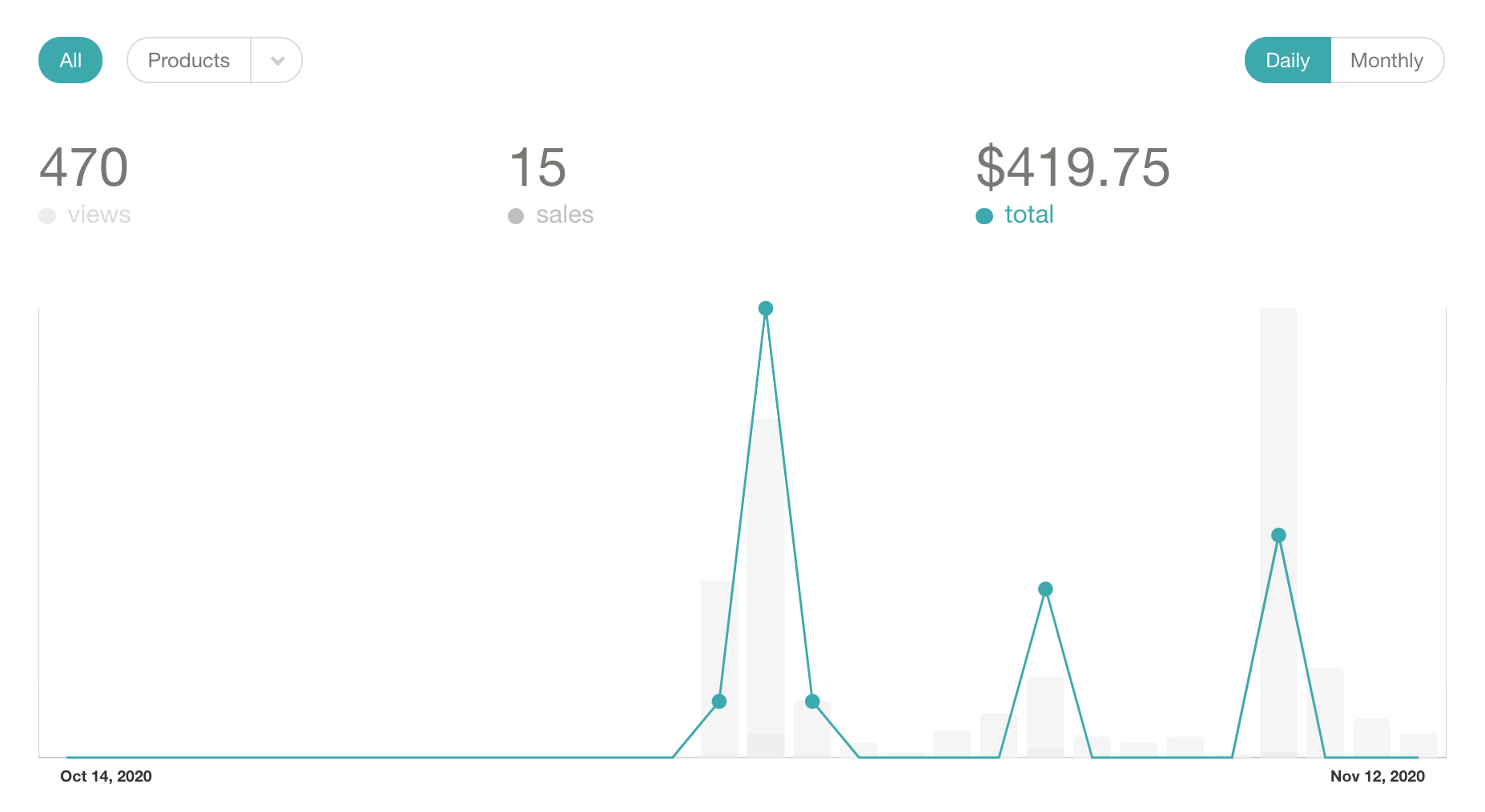 Lately, I've been reflecting on why the sales are what they are and how I might improve the marketing machine behind it. Here are a few thoughts I've had which may explain (at least in part) the numbers:

The pricing is one thing I'm wondering if I could've done better. At $99, I think it's a steal given how much work I put into it, but I'm not sure the market agrees. Perhaps if I would've priced it lower, I might've seen more sales... but who knows!

The conversion rate seems low (disclaimer: I don't know anything about conversion rates), but an even bigger culprit is likely that not many people have seen it. The 470 views in the screenshot above include everyone who's seen the product page during both the pre-order phase and since launch. If I get more eyes on the target, I'm sure it'll lead to more sales.

I need to do a better job of showing the product and demonstrating its value to a potential buyer. Not only that, but people love free stuff, so I should include some of that too. Perhaps the design for a single landing page, a subset of the design system, or simply a demonstration video would work.

My Audience is Small

Let's be honest, friends. My audience is currently small. You're all super awesome, by the way. You've also been incredibly generous with your sharing and retweets of my stuff. Thank you! I have little-to-no email list either, so that's something I plan to focus on in the coming months.

You can sign up at the bottom of the page to get updates on when I launch (or give away) things, by the way. I promise I'll never send you spam.

Looking to The Future

Reflecting on the launch is fun. I'm happy with how it went and completely blown away by the support and generosity of people. Thanks, friends! In the next few weeks, I'll be updating the kit, fixing a few "bugs," adding more videos, and adding some more sliced landing pages. This is just the beginning. I'm looking forward to making this product much better and to making the next one! 🚀

P.S. If you haven't bought the kit yet and want to, DM me on Twitter, I'll give you a special discount.

Enjoy this article? Follow me on Twitter for more tips, articles and links.
Twitter
😢 Awww, nobody has liked or mentioned this on Twitter yet.
Older
« How to Build an Email Signup Form with TailwindCSS, AlpineJS and the ConvertKit API
Newer
Replacing a Relic »